In the midst of her secret wartime mission of helping British, French and Belgian soldiers escape to safety, English nurse Edith Cavell confided to her friend and fellow conspirator Louise Thuliez, “If we are arrested we shall be punished in any case, whether we have done much or little. So let us go ahead and save as many as possible of these unfortunate men.” (Souhami p. 224) As part of a resistance network spreading across Belgium, she assisted approximately 200 Allied soldiers get out of German-occupied Belgium and into the neutral Netherlands, during the first year of the war. She also nursed wounded soldiers on both sides. 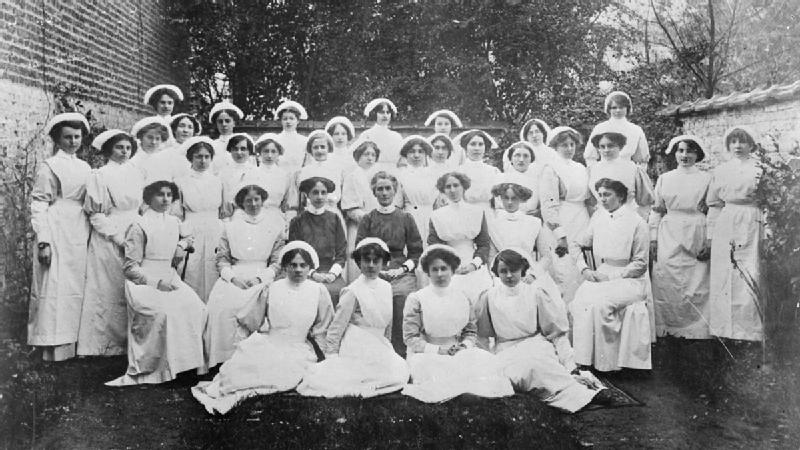 Nurse Edith Cavell (seated centre) with student nurses in Brussels. Photo: Imperial War Museum via Wikimedia Commons.
After her death she was described by the Bishop of London as a “poor defenceless English girl” (Souhami p. 339) – a typical example of the recruitment propaganda which co-opted her story, usually designed to appeal to the ideals of chivalry common to the period. But Edith was 49 years old, and she knew exactly what she was doing as well as the likely consequences. At her trial she stated that she was not helping to recruit soldiers but help trapped men get out of a war zone. Considered to be the pioneer of modern nursing in Belgium, caring was her metier. Brand Whitlock of the American Legation in Brussels wrote that “Miss Cavell, far from shielding herself has, with commendable straightforwardness, admitted the truth of all the charges against her, and it is the very information which she herself has furnished…that has aggravated the severity of the sentence passed against her.” (Souhami, p. 311). Her famous dictum Patriotism is not enough, spoken just before her death, didn’t only reflect the motives behind her wartime resistance, but the philosophy which guided her whole life – serving God and doing her duty. “Think of me as a nurse who tried to do her duty.”
She had moved to Belgium because she knew the standards of the nursing profession there were lagging far behind those of England, which had benefited from the pioneering work of Florence Nightingale. One of her future plans was to set up a home for retired nurses. The status of a martyr with international fame could not be further from her mind. Duty, one of the favourite virtues of the middle-class Victorians, had inspired her whole life. She didn’t jump spontaneously into resistance work. It was a natural out-working of her world view, and for her, the only conscionable response to the atrocities happening all around her.
27 years later, a Jewish woman in Nazi-occupied Holland decided not to find a hiding place. “Many accuse me of indifference and passivity when I refuse to go into hiding. They say everyone who can must try to stay out of their clutches…I don’t feel in anybody’s clutches; I feel safe in God’s arms…” wrote Etty Hillesum on 11th July 1942. (p. 176) The diary she kept between 1941 and 42 describes her personal spiritual awakening with the assistance of her therapist (and lover) Julius Speer, while living in the house of her employer (and lover) Han Wegerif. It also describes the gradual encroachments of Nazi rule on the Jews’ civil liberties, which Etty knew was only the beginning of their plans of total annihilation. She gradually came to realise that as she grew closer to God (a being she found through both the Jewish and Christian traditions, and came to have a personal relationship with, despite her unconventional private life) she was able to find peace and solace within herself, and the ability to comfort others, no matter the circumstances.
“God, do not let me dissipate my strength, not the least little bit of strength, on useless hatred against these soldiers. Let me save my strength for better things,” she prayed in April 1942. (p. 109)
“True peace will come only when every individual finds peace within himself; when we have all vanquished and transformed our hatred for our fellow human beings of whatever race – even into love one day…I hold life dear indeed, in this year of our Lord 1942, the umpteenth year of the war.” June 1942. (p. 145)

Portretfoto van Etty Hillesum met hand onder haar kin, circa 1940. Photo: Joods Historisch Museum via Wikimedia Commons
That same year, despising her job with the Jewish Council, she volunteered to accompany the first group of Jews to be sent to the Westerbork Durchgangslager (transit camp). In one letter written from the camp, she signs herself the thinking heart of the barracks. When she and her family were put on the train towards Auschwitz and death in 1943, she wrote on a postcard and threw it out the window, where it was found by farmers and posted. “We left the camp singing…” (p. 360)
“The more peace there is in us, the more peace there will also be in our troubled world.” (p. 218)
This was Etty’s resistance – refusing to hate. Fighting against her own fears and the horrors unfolding around her by finding an inner peace, a portable peace, and sharing it with others. She does not at all imply that the Jews who went into hiding were less courageous, but her own conscience would not allow her to attempt to save herself first.
When faced with a crisis in which death was almost certain, both Edith and Etty were prepared. They had already developed the mental and emotional resources needed for acts of courage. To use an old fashioned phrase, they had moral fibre.
The most well-known use of that phrase is in the negative. Lack of moral fibre, or LMF, was the designation given by the Royal Air Force during WW2 for pilots who deserted or refused to fly. With a limited understanding of post-traumatic stress, and even less compassion, the RAF authorities framed a psychological affliction as a moral failing.
I believe the concept has another meaning entirely, and it is the very quality that Edith and Etty not only possessed during their respective wars, but worked to achieve before they were tested. It is also a quality I believe we can all attain, with conscious determination and the work of God in our hearts. If you are in the habit of lifting weights, then moving a boulder is less of a challenge. If you play your scales, then Beethoven’s Emperor Concerto is not impossible. If you pursue inner peace and choose to do right in small things, you will find a reserve of moral courage growing inside you. Most of us will never face a life or death situation. We will not find ourselves in this midst of a conflict zone or hostile occupation. We will only ever have to do right in the small things. But the moral fibre we are exercising will strengthen us to “be willing to act as a balm for all wounds” (Hillesum 12/10/42, p. 231). Great acts of courage are proclaimed to be extraordinary by others, but are often simply one of a series of moments in that person’s life where they chose to be brave.
“Oh Lord, let me perform a thousand daily tasks with love, but let every one spring from a greater central core of devotion and love.” (1941, p. 70)

One thought on “Moral fibre (or, heroism begins in peacetime)”