“Chivalry! – why, maiden, she is the nurse of pure and high affection – the stay of the oppressed, the redresser of grievances, the curb of the power of the tyrant – Nobility were but an empty name without her, and liberty finds the best protection in her lance and her sword”
Wilfred of Ivanhoe is a Saxon knight with very high ideals. His Jewish friend Rebecca is rather skeptical about the idea of chivalry and thinks it only spurs men on to fight wars that end in bloodshed – “what is it, valiant knight, save an offering of sacrifice to a demon of vain-glory?”
But however much Ivanhoe waxes lyrical about the virtues of chivalry, it turns out he can’t live up to them. When he tries to rescue Rebecca from captivity by jousting on her behalf in a trial by combat, he is so weak his opponent knocks him off his horse. Then the apparent victor conveniently dies, leaving Ivanhoe free to marry the other girl, noble beauty Rowena. Sir Walter Scott knew his readership at the time wouldn’t like the hero to marry a Jewish character, even if she is more interesting. But he did kick-start the Victorian obsession with the Middle Ages, with Tennyson, Rossetti and John William Waterhouse idealizing and glamorizing medieval knights and ladies in art and verse.

John William Waterhouse, via Wikimedia Commons
There she weaves by night and day
A magic web with colours gay.
She has heard a whisper say,
A curse is on her if she stay
To look down to Camelot.

(Alfred, Lord Tennyson – The Lady of Shallott)
It is probably this later, somewhat nostalgic view of the High Medieval period that has both inspired and constructed the concept of chivalry, which fitted in very nicely with Victorian ideals of how gentlemen and ladies should behave, as well as their rosy-tinted view of the past. Many people today think of the 1950s the same way, but nostalgia is frequently just an emotional version of historical revisionism.
The word chivalry simply means knight or horseman, from the French chevalier. It came to be associated with a code of conduct which emphasized gallantry, courtesy and honour partly due to the ideals behind the Crusades (far different from their brutal reality) and the Court of Love held by Eleanor of Aquitaine when she was in charge of her own lands at Poitiers in the later 12th century. This spurious and possibly ironic ‘court’ supposedly attracted artist and poets who took up the themes of chivalry and courtly love in their ballads and literature. Eleanor herself had been on a crusade, and knew what they were really like. 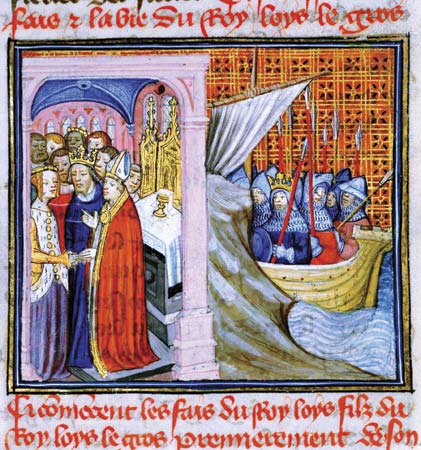 (“Louis VII and Alienor” from Les Chroniques de Saint Denis, via Wikimedia Commons.)
Chivalry is not dead however, as some have claimed, since the idea is still being deconstructed by some and promoted by others.
The website Chivalry Today suggests chivalry is a sign of moral uprightness: like those knights in shining armor hundreds of years ago, we want to experience the satisfaction of knowing that we have championed the right causes and embraced the right principles, not because we were told to do so, but simply because we have chosen to follow that path.
The Atlantic columnist Emily Esfahani Smith equates chivalry with selflessness:
“But heroism and chivalry share a basic feature in common—the recognition, a transcendent one, that there is something greater than the self-worth protecting, and that there is something greater than the self-worth sacrificing your own needs, desires, and even life for
The tacit assumption that men would risk their lives to protect women only underscores how valued women are—how elevated their status is—under the system of chivalry.”

By using the phrases tacit assumption and elevated status Smith has put her finger on precisely why the concept of chivalry is so problematic in the 21st century and why it is quite rightly interpreted as benevolent sexism.
When men elevate women to a higher plane or put them on a pedestal, this may look like honour but is in fact restricting their freedom and perpetuating gender stereotypes. They are taking the perfectly admirable behaviours of courage and good manners and making them unnecessarily gendered. Heroism is not an exclusively male domain and politeness should be mutual. Who opens the door, an act frequently cited as the classic chivalrous action, is really irrelevant, in my opinion. If you’re in front, hold the door for whoever is behind!
Incidentally, the whole idea of chivalry is based on heteronormative assumptions.
A 2015 study conducted by psychologists at Northeastern University in Boston involved 27 male-female pairs who were observed playing a trivia game and then chatting afterwards. “No matter how the women acted, men were more likely to show patience and friendly non-verbal cues the more highly they rated on the benevolent sexism scale…so basically, irrespective of how the women acted, some men were rigidly tethered to their preconceived ideas about the fairer sex”

So when it looked like a man was being nice to his female partner, he was actually assuming that she couldn’t play the game as well as he could, so he decided to ‘be nice’ and let her have more time to answer the questions. Maybe some women like it when men let them win; an intelligent woman wants a fair game with a genuine opponent. I know my trivia – bring it on!
Women who believe in traditional gender roles are also more likely to support benevolent sexism, because they think they are benefiting from it. Catherine Woulfe, writing in online New Zealand magazine Noted, suggests that people who admire chivalry “are more likely to have unrealistic ideas about what a relationship will be like. They tend to believe that any disagreement is destructive, that partners should be able to read each other’s minds and feelings, and that some people are fated to be together…the grand irony is that although benevolent sexism appears to damage relationships, it is a desire for romance that keeps such sexist attitudes alive.”

Olivia de Havilland and Errol Flynn as Maid Marian and Robin Hood. Warner Bros. (Original trailer) [Public domain], via Wikimedia Commons
While many women may have the desire to be protected, getting into the habit of being looked after by a man may prove disastrous if the relationship falls apart. This desire is not entirely unreasonable, after all, the world is a dangerous place for women. But having practical skills, financial independence and emotional resilience are things I believe women should try to cultivate. They are absolutely essential for single women.
For men, the idea of looking after a woman frequently arises from a position of privilege. Men are physically stronger, frequently earn more money and often receive preferential treatment. Chivalry is therefore a combination of male privilege and able-bodied privilege. When men think that women need protection, they are looking at the symptom not the disease. What really needs fixing is toxic masculinity, violence against women and widespread objectification. In many parts of the world (Australia being no exception), life for women is no safer than it was in the Middle Ages, but the answer is not chivalry, it is a safer world for everyone.

One thought on “Don’t be chivalrous, be kind”