The transformed speaks only to relinquishers. All holders-on are stranglers. (Rainer Maria Rilke)

In April 1942, a Jewish man in Amsterdam cycled down Beethovenstraat wearing a yellow star. This was not unusual, but this particular man was observed with surprise and pleasure by fellow Jew Etty Hillesum, who recorded in her diary that “he was wearing a huge golden star…he was a procession and a demonstration all by himself” (p. 129). At a time when Jews in the Nazi-occupied Netherlands were losing more and more of their rights and liberties, going into hiding and trying to escape the transports, this man made his yellow star as big as he could and wore it proudly. Perhaps we might think he was simple-minded. Perhaps he had simply decided that the Nazis were not going to rob him of joy, although they could take almost everything else. 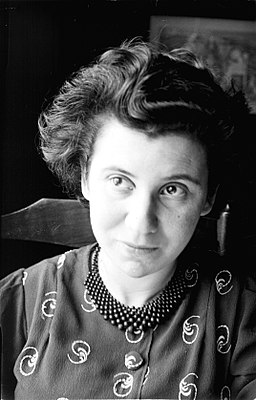 Photo: Etty Hillesum, 1939. Joods Historisch Museum via Wikimedia Commons.
This small incident is indicative of the attitude to life and the imminent Holocaust that Etty tries to cultivate within herself throughout the two years that she kept a diary. She began writing in March 1941 at the suggestion of her therapist, Julius Spier, a psycho-chirologist whom Etty had begun to consult in order to treat her depression and emotional issues. Psycho-chirology, although still practiced today, appears to be more of a pseudo-science or branch of parapsychology. It involves analysing a patient’s emotional and psychological state from the lines on the palm of their hand. Practitioners insist it has nothing to do with chiromancy or palmistry. Spier, formerly a student of Carl Jung, employs other unorthodox techniques such as wrestling with his patients. It is not surprising that he crosses the boundaries of professional conduct and has an affair with Etty. The first part of her diary chronicles her encounters with Spier and her struggle to deal with her feelings for him, and since the diary’s publication has attracted criticism from Holocaust scholars for not discussing the social and political turmoil of the time (Gubar, 2006, p. 280). However this is the starting point for Etty’s emotional and spiritual journey, one that takes her from a fragile woman who cannot sort out her men, to an extraordinarily courageous woman who volunteers to go to the Westerbork transit camp to help care for fellow prisoners. Her diary begins as an attempt to understand and gain control of her inner life, and this struggle allows her to slowly gain the ability to look outside of herself and consider what she can do to relieve the sufferings of others, and this is why I admire her so much. 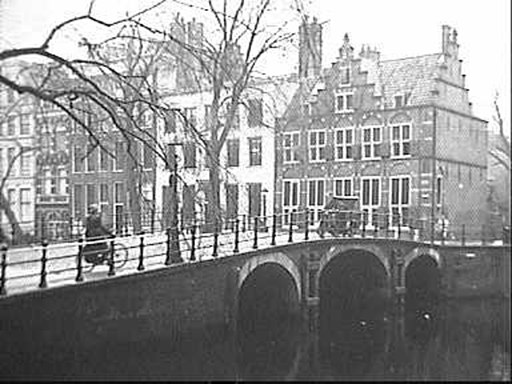 Photo: Hoekhuizen – Amsterdam. Rijksdients voor het Cultureel Erfgoed via Wikimedia Commons (CC BY-SA 4.0)
Many people would not admire her. In her very first journal entry she describes herself as “accomplished in bed” and makes no bones about the fact that her relationship with her “landlord” Han Wegerif continues during her affair with Spier. Later in 1941 she realises that she is pregnant and in November decides to have an abortion. She is rather vague about this in her diary, but it does seem as though she performed the abortion herself – “I assault myself with hot water and blood curdling instruments…” (p. 71), but goes on to explain that her physical weakness and the history of mental illness in her family made her decide to never have children. She does not mention life under Nazi occupation as a factor in this decision, but I am sure it must have influenced her. Increasing food shortages, the lack of civil liberties and the rumours of concentration camps would have made the prospect of single motherhood terrifying. “All I want is to keep someone out of this miserable world,” she writes. I once heard of a not dissimilar situation from a Holocaust survivor who was (about ten years ago) a guide at the Sydney Jewish Museum. Her family were hiding in a cave outside the city where they had previously lived. Not long after going into hiding, her mother realised she was pregnant, so she snuck back into town at night and bribed a doctor to perform an abortion. A newborn infant would probably not have survived life in a cave, and the noise would have put the whole family in danger. Just as Etty’s child, if it had been born, would probably have died either on the journey to Auschwitz or in the gas chamber alongside Etty, who was murdered on 30th November 1943.

Photo: Dagboek Etty Hillesum, deel 1. Geheugen van Nederland via Wikimedia Commons.
One of Etty’s remarkable qualities was the ability to see her enemies and oppressors as human and make the decision not to hate them. “It is the problem of our age: hatred of Germans poisons everyone’s mind,” she writes in March 1941. “Indiscriminate hatred is the worst thing there is. It is a sickness of the soul.” (p. 11). When she went to the Gestapo headquarters to be registered, one of the guards was shouting at everyone. “I thought him more pitiable than those he shouted at…I felt no indignation, rather a real compassion, and would have liked to ask, Did you have a very unhappy childhood…” (p. 85-86). She is able to pray, “God, do not let me dissipate my strength…on useless hatred. Let me save my strength for better things.” (p. 109). Many people might have thought hatred and thoughts of vengeance were sustaining emotions that would carry them through. Etty knew they only create more bitterness and violence, and that true strength and peace came from God.
Etty’s God is not an easy deity to define, from reading her diary. She is not a devout Jew and the consciousness of her Jewish identity seems to mainly come from Nazi persecution. She is highly assimilated and her spirituality is more Christian than Jewish (Lalonde, 2016, p. 66). She reads the New Testament, St Augustine and St Francis of Assisi. Throughout the diary, her personal relationship with God grows and she records many of her prayers. “There will always be a small patch of sky above, and there will always be enough space to fold two hands in prayer.” (p. 181). Like the medieval mystics, her emphasis is always on developing the inner life. “When actual sight ceased,” wrote Julian of Norwich, “my inward sight persisted. (p. 74)…thus I saw God to be our true peace, who keeps us safe when we are anything but peaceful, and who always works to bring us to everlasting peace.” (p. 138).
“Ultimately,” says Etty in the same vein, “we have just one moral duty, to reclaim large areas of peace in ourselves…and to reflect it towards others. And the more peace there is in us, the more peace there will also be in our troubled world.” (p. 218) This was not a platitude or fine words for Etty. “Unless every smallest detail in your daily life is in harmony with the high ideals you profess, then those ideals have no meaning,” she wrote in April 1942. The development of her inner peace and strength enabled her to make some brave decisions. In July of the same year, friends urged her to go into hiding but she refused. “They keep telling me that someone like me has a duty to go into hiding, because I have so many things to do in life, so much to give. But I know that whatever I may have to give to others, I can give no matter where I am…” (p. 177). Etty refused to accept the implication that she deserved to survive, more than others. She worked for the Jewish Council for a short time, then volunteers to join the first group of Jews to be sent to the Westerbork Transit Camp. She remained there, trying her best to help fellow inmates, until September 1943 when she, her parents and brother were sent to Auschwitz.
Her diary was not published until 1981, and translated into English in 1983. One word Etty uses, however, is always left in its original German – hineinhorchen – partly because Etty herself doesn’t translate it into Dutch, but suggests it might mean something like ‘to hearken inwards’. The dictionary definition of the reflexive form of this verb (in sich hineinhorchen) is ‘to do some soul-searching.’ Reclaiming peace within herself meant she had peace to give to others: “I hope to be a centre of peace in that madhouse [i.e. the Jewish Council]” (p. 184). Being willing to go to Westerbork meant that Etty was probably more psychologically prepared than most of her fellow Jews. In the months before her departure she was deliberately trying to sever emotional ties to her home and possessions, and to make sure that she only relied upon resources she carried inside herself. “I feel that I am still tied by a thousand threads to everything I treasure here. I will have to tear myself away bit by bit…” (p. 194) “I am in search of a haven, yet first I must build it for myself, stone by stone.” (p. 55). “Wherever I go, won’t there be the same earth under my roving feet and the same sky…above my grateful head?” (p. 210).
Above all, she tried to maintain a softness of heart. “There is a difference between hardy and hard…I believe that I get hardier every day…but I shall never grow hard.” (p. 195). “I love people so terribly,” she tells God in September 1942, “because in every human being I love something of you.” (p. 198). At the end of that same entry she signs herself the thinking heart of the barracks.

Lalonde, Marc P. (2016) The religious meaning and significance of the Holocaust today: the diary of Etty Hillesum. Journal of Jewish Identities, 9 (1), pp. 59-74.